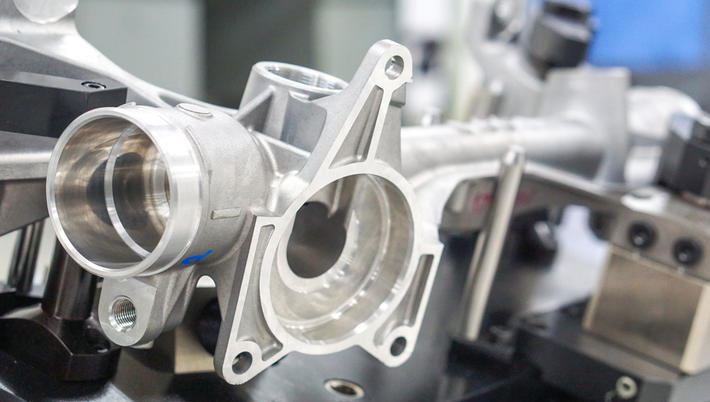 An ecological solution with osmotic water was developed for the treatment of the water used in the cooling systems of the diecasting lines. A solution already successfully applied in some evaporative towers.

In the diecasting production cycle, water is used for cooling the oils, molds and castings produced, as well as for mixing the release agent. A company specialized in the design of systems and solutions for the treatment of water and process fluids based in the province of Brescia, has developed a system which, using osmotic water, improves the efficiency of cooling towers and the preparation of releasing.

With the process developed for water treatment in the die-casting process, the well water, before entering the production process, is treated with a reverse osmosis system to reduce salinity, obtaining purer water than systems with softeners chemicals that only eliminate limescale.

Osmosis is a chemical-physical process that occurs whenever two aqueous solutions containing different saline concentrations are separated by a semipermeable membrane, in this situation the spontaneous passage of water from the more diluted solution to the more concentrated one takes place until reaching the same salinity.

The pressure that is generated (from the Greek osmós = thrust) is the so-called “osmotic pressure”: the greater the difference between the starting saline concentrations and the higher the osmotic pressure value. By exerting a counterpressure, higher than the osmotic one, the process can be reversed. This is the principle on which reverse osmosis is based: the passage of water through a semi-permeable membrane in the opposite direction to the natural one, with the generation of two solutions: one with a high salt concentration and the other very diluted.

The osmotic water replenishes the cooling circuit of the diecasting cells, which generally uses cooling towers, while the residual water with a high salt concentration can be disposed of easily, as it is not yet contaminated by substances used in the production process. In turn, the residual foundry fluids are treated in an evaporator to recover the water and eliminate the concentrated waste to be sent after disposal.

The water recovered from the evaporator returns to the circulation to feed the distillate storage for the preparation of the release agent where, depending on the physical / chemical characteristics required, it is reintegrated with osmotic water or raw mains water.

The advantages of osmotic water in closed circuit systems

The process with osmotic water therefore allows a complete water cycle, practically with zero discharge and offers important advantages in the management of the cooling circuit with evaporative towers. In particular, it avoids the formation of inorganic deposits (generally calcium carbonate) which act as thermal insulators, significantly reducing the yields of the heat exchange processes and drastically lowering the efficiency of the cooling systems.

Another phenomenon to be countered, triggered by an incorrect water acidity value (Ph) is the corrosion of galvanized surfaces. Furthermore, the cooling waters contain bacteria and mildew; the most serious drawback caused by the excessive concentration of these microbial species is the formation of biological silt (or biofilm), a gelatinous and adherent deposit that can grow in volume very quickly, occluding the packs of the towers and the water distribution lines.

Biofilm greatly reduces the efficiency of heat exchange processes and it must be taken into account that some microbial species could be pathogenic. For this reason, cooling towers are considered among the potentially most dangerous systems for the spread of Legionella contamination (Legionellosis).

A reverse osmosis system for replenishing the water in the system prevents the appearance of these problems and therefore offers a series of advantages compared to a traditional treatment with hard or softened water, respecting all the chemical-physical parameters recommended by the manufacturers of condensers and evaporative towers:

- No production of non-standard eluates;
- Reduction of waste water and purge to about 30% of the evaporated;
- Absolute absence of scale formation;
- Easy control of corrosive phenomena;
- Simple and safe operation;
- Simple maintenance;
- Overall cost of convenient treatment.