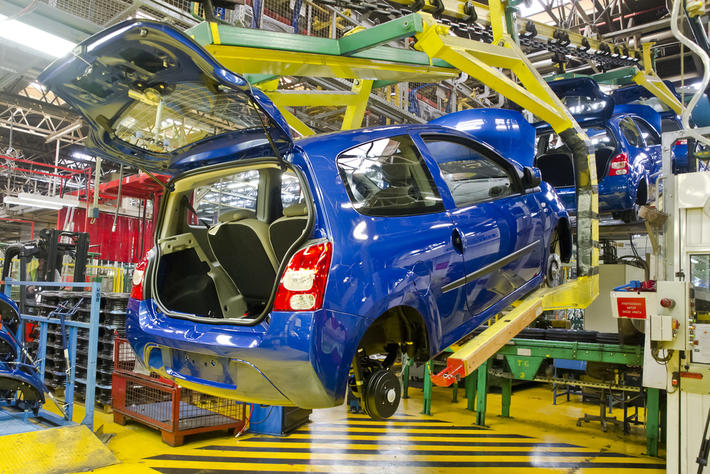 The aluminum alloys used in the automotive sector are heat treatable, since through this treatment it is possible to considerably increase their mechanical strength. In order to reduce production costs, innovative aluminum alloys have recently been developed, among which self-aging Al alloys are very interesting. These are Al-Zn-Si-Mg alloys of the 7xxx series, whose most important feature lies in the possibility of achieving good mechanical resistance, without requiring them to be subjected to heat treatment. This is because they are subject to a natural aging phenomenon, following a period of maintenance at room temperature, between seven and ten days, they reach good mechanical properties. Using these aluminum alloys in the automotive sector would allow, thanks to the possibility of eliminating heat treatment, to obtain important advantages both from an economic point of view and from an environmental impact point of view. In the present research work the microstructure, corrosion resistance and mechanical properties of the self-aging Aluminum alloy (Al-Zn10-Si8-MG EN-AC-7100) have been studied.

Introduction to aluminum alloys in the automotive sector

Aluminum alloys in the automotive sector are currently widely used to make mechanical components due to their excellent properties: low density, high specific strength, good accounting and good corrosion resistance. The use of aluminum alloys in the automotive sector allows for a significant reduction in vehicle weight, with a consequent decrease in both fuel consumption and gas emissions, reducing the environmental impact. There are two categories of aluminum alloys: non-heat-treatable alloys, which reach excellent mechanical resistance values, following plastic deformation processes, carried out both cold and hot; and heat treatable alloys which have high mechanical properties following the application of a heat treatment. The strengthening mechanism of heat treatable aluminum alloys is represented by the precipitation of strengthening precipitates, which are formed during the aging phase which can be natural, if carried out at room temperature or artificial if carried out at high temperature. The first precipitates that are formed are coherent with the aluminum matrix, ie they have the same crystal lattice and represent an obstacle to the movement of the dislocations, responsible for the plastic deformation. By increasing the aging time the precipitates become inconsistent with the matrix and consequently constitute a separate phase, which determines a reduction of the mechanical properties.

During the aging phase, the materials can be heated at different temperatures and for different times, which induces different microstructural characteristics and therefore different mechanical properties. Currently various researches have been conducted to develop both innovative production methods and aluminum alloys for the automotive sector with optimized chemical composition. Among these alloys, the self-aging aluminum alloys are particularly interesting, i.e. Al-Zn-Si-Mg alloys of the 7xxx series, whose main characteristic lies in being subject to natural aging, if kept at room temperature for a period of time between 7 and 10 days, after which they reach good mechanical properties, without the need to be subjected to heat treatment. The possibility of eliminating heat treatment, thanks to the use of these aluminum alloys in the automotive sector for the production of mechanical components, would allow the industry to obtain important advantages both from an economic point of view and from an impact point of view. environmental. The first part of the present study represents a review of the research work carried out so far by the authors of this research, concerning the microstructural characterization of the self-aging alloys in question, while in the second part the results relating to the study of resistance to intergranular corrosion and the mechanical properties of these alloys.

The effect of both the Mg content (wt%) and of different cooling rates on the microstructure, mechanical properties and resistance to intergranular corrosion of the EN-AC-7110 alloy (AlZn10Si8Mg) was evaluated. In equilibrium conditions, the maximum solubility of magnesium in aluminum is 17.4 wt%, generally the content of MG does not exceed 5% in Al alloys from plastic deformation, while as regards foundry Al alloys it does not exceed 10%.In the present research work, three different alloys have been made, indicated as AlZn10Si8Mg, AlZn10Si8Mg1 AlZn-10Si8Mg3.The samples used for microstructural analysis, mechanical tests and corrosion resistance tests were obtained from the component with a step geometry, which was produced by chill mould casting. The stepped geometry of this component, characterized by four distinct areas with different thicknesses, made it possible to evaluate the effect of different cooling rates on the microstructural and mechanical characteristics of aluminum alloys for the automotive sector. In fact, the cooling speed increases moving from zone D (thickest zone 20 mm) to zone A (thinner zone 5 mm). The mechanical properties of the three alloys were evaluated by three-point bending test (DynamometerZwick Z100), using a load of 5KN. Samples of 50mmx10mmx5mm dimensions used for the tests were obtained from zones A and C. While from zones B and D standard size samples (10mmx10mmx55mm) were obtained, used for the Charpy test. A 50J instrumented pendulum and uncarved specimens were used. By obtaining the samples from different areas, it was possible to evaluate the effect of the cooling rate on both the flexural strength and the resilience of the three alloys studied. The microstructural analysis was carried out using an optical microscope (MeF4 Reichart-Jung) and a scanning electron microscope (SEM, Leo 1450VP), equipped with an EDS microprobe (Oxford microprobe), used for compositional analyzes . The samples were prepared with standard metallographic preparation techniques. Phase identification was conducted by X-ray diffraction (X-ray, PANanalytic). Finally, the resistance to intergranular corrosion of these alloys was studied by means of a test conducted according to the BS 11846 method B standard. In this test, the samples were initially cleaned with acetone and ethanol, then they were subjected to an alkaline attack (immersion for 5 min in a 7.5% by weight solution of NaOH, maintained at a temperature between 55-60 ° C) , finally they were immersed for 24 hours in an acidified saline solution (30 g of NaCl and 10 ml of HCl per liter). At the end of the test the samples were washed in water and ethanol and dried. Susceptibility to intergranular corrosion was evaluated by measuring the corrosion penetration depth and weight loss. The three-point bending test and the Charpy test, in order to study the effect of corrosion on mechanical properties and resilience, were also carried out on samples previously subjected to the corrosion test.

The microstructure of the three alloys consists mainly of α-Al grains and the eutectic phase Al-Si. Furthermore, primary and intermetallic Mg-Si silicon crystals were identified. The values of the secondary dendritic spacing (SDAS), as well as the shape and size of the eutectic silicon, are influenced by the cooling rate, in fact, by increasing the cooling rate the SDAS value decreases, due to the greater subcooling and the greater speed of movement of the solid-liquid interface. By observing the micrographs, it can be seen that as the cooling rate increases, the size of the eutectic silicon particles decreases and their morphology becomes finer. The modification of the eutectic silicon, with regard to the AlZn10Si8Mg1 and AlZnSi8Mg3 alloys, appears to be influenced not only by the cooling rate but also by the percentage by weight of Mg. In fact, Mg seems to act as a modifier for Si particles when its content is increased up to 3% by weight. A high cooling rate reinforces the modification effect due to the presence of Mg. In the AlZn10Si8Mg1 alloy the Si particles appear finer than those of the AlZn10Si8Mg alloy, however they still show a lamellar morphology, while in the AlZn10Si8Mg3 alloy they appear even finer and with a globular structure.In order to be able to evaluate the morphology of the silicon particles, some of their microstructural characteristics were measured: the area, the roundness and finally the equivalent diameter.It can be noted that for any of the four areas of the step sample considered, by increasing the Mg content, finer Si particles are obtained. However, with only 3% Mg by weight, such particles show a globular structure. With a weight percentage of Mg equal to 1%, the area of ​​these particles decreases, but they still have a lamellar morphology. With the same Mg content, by increasing the cooling speed, the size of the silicon particles decreases. By observing the microstructures, it is possible to conclude that the most effective modification of the eutectic silicon particles is achieved by using a high cooling rate and a high percentage by weight of Mg.

It is also possible to observe the trend of the roundness of the eutectic silicon particles as the cooling rates and the Mg content vary. Roundness was calculated using the following formula:

where p and A respectively represent the perimeter and area of the Si particles.

Silicon particles with a spherical morphology have a lower tendency to act as stress concentration zones and consequently as possible sites for nucleation of cracks. The Si spheroidization can also be achieved during the solubilization step of the heat treatment. To evaluate the spheroidization of the silicon particles, their equivalent diameter was calculated using the following formula:

The signals relating to the α-Al and Si matrix have been identified in each spectrum, while as the Mg content increases, an increase in the intensity of the signal relating to the Mg2Si strengthening precipitates can be observed. In addition, diffraction peaks related to MgZn2 precipitates were identified in the diffractograms of all three alloys.

Resistance of aluminum alloys for the automotive sector to intergranular corrosion

By increasing the Mg content up to 3% by weight, the precipitation of intermetallic Mg was observed, which acted as anodes during the corrosion process. Furthermore, following the increase in the Mg content, the content of the Mg2Si strengthening precipitates has increased, which act as anodes with respect to the aluminum matrix. Therefore, thanks to the increase in the volume fraction of Mg2Si precipitates and intermetallics of Mg, both with anodic behavior compared to the aluminum matrix, it was possible to increase the corrosion resistance of self-aging aluminum alloys, increasing the Mg content. In fact, the AlZn10Si8Mg3 alloy has the lowest value both in terms of weight loss and in terms of corrosion penetration depth.

Mechanical properties of aluminum alloys in the automotive sector

The mechanical properties of the three self-aging alloys were evaluated by means of a three-point bending test and Charpy test, both before and after the intergranular corrosion test, in order to evaluate the effect of corrosion on the mechanical strength and strength of the alloys. In the case of AlZn10Si8Mg and AlZn10Si8Mg1 alloys, corrosion caused a decrease of about 20% in the bending tensile strength. On the other hand, the AlZn10SiMg3 alloy has similar values both before and after the corrosion test.

Self-aging aluminum alloys, thanks to the possibility of achieving good mechanical characteristics without the need to be subjected to a heat treatment, represent a potential candidate for the production of mechanical components. The use of aluminum alloys in the automotive sector in fact allows this industry to obtain important advantages from an economic point of view and on environmental impact. The conclusions that can be drawn from the results obtained so far are: